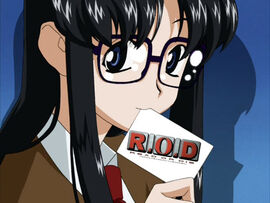 The Paper, Nancy Makuhari, and Drake Anderson travel to India to investigate the origin of the book, but are interrupted when another I-jin appears. Meanwhile, Joseph Carpenter is suspicious about one of his agents and asks Wendy Earheart to investigate; what she discovers shocks him.

A videotaped scene is playing on the television: it shows two I-Jin, one of them Gennai Hiraga (clearly identifiable by the Elekiter on his back) talking to another man. The man looks straight at the camera and the picture vanishes: the satellite viewing them was destroyed.

Joseph Carpenter comes onscreen to speak to his three agents. They are to find someone named Jahal, in India, who may know something about the books. Joseph Carpenter appears suspicious of Nancy, and assigns Wendy the task of secretly investigating Miss Deep's background.

Agent Paper and Miss Deep break into Jahal's store, only to be interrupted by the new I-Jin: Genjo Sanzo. From the story Journey to the West, this man combines the powers of all the characters: he blocks Miss Deep's gunfire with his Nyoi-Bo and burns Yomiko's paper with his fire breath. Yomiko runs, leaving Miss Deep to fight the I-Jin, but Nancy later catches up with her.

The two agents attempt to flee to the submarine, but Sanzo parts the water, stranding them in a once-underwater ruin. Sanzo is able to knock Nancy into the water before pursuing Yomiko. Yomiko runs out of paper, but Nancy returns to distract Sanzo. This gives Yomiko time to run towards the submarine, where Drake fires a torpedo at Sanzo.

Sanzo, amazingly, survives. Nancy and Yomiko regroup and Nancy comes up with a new plan. As Sanzo scans the area, he sees a girl in a long coat run away. He stabs her with his Nyoi-Bo, but it turns out to be Nancy! As she holds Sanzo still Yomiko is able to defeat Sanzo with her paper. Nancy is gravely wounded, however, and Yomiko runs to help her. Unfortunately, this leaves the book unprotected, and Sanzo is able to retrieve the book, throwing it to a young child in a dragonfly machine (Jean-Henri Fabre who escapes with it).

Before Sanzo can get his revenge on Yomiko, a mysterious staff suddenly appears in his body, killing him. With Sanzo dead, the water is no longer held back; Yomiko and an unconscious Nancy make it back to the submarine just in time.

Nancy later wakes up a hospital with Yomiko looking over her. Nancy apologizes for losing the book, but Yomiko replies, "We can always get the book back, but there is only one Nancy!"

The three agents are soon airborne again, flying towards some unknown destination. Suddenly the radio transmissions blank out, playing Beethoven's Ninth Symphony; somewhere in the Pacific a fortress rises out of the water. A man appears on televisions and radios around the world, including the British Library's and the airplane's. The man, revealed to be Ikkyu, talks about overpopulation of the world, quietly sharing his plan to eliminate the human race.

Back at the British Library, Wendy rushes towards Joseph Carpenter with devastating news. According to records, Nancy Makuhari died in a hospital years ago! At this moment Ikkyu ends his speech with a sigh and says, "Isn't it time you came back, Mata Hari?"

Miss Deep is immediately revealed as the I-Jin's spy. Drake attempts to arrest her, but Yomiko jumps in the way to defend Nancy. Nancy, however, takes Yomiko hostage. She kisses Yomiko on the neck, leaving an imprint of her lipstick, then falls through the airplane floor to be caught by Fabre and fly away.

Retrieved from "https://readordie.fandom.com/wiki/OVA_Episode_2?oldid=7809"
Community content is available under CC-BY-SA unless otherwise noted.